I’m going to mix things up a bit this week. Instead of the usual categories, I’m going to choose topical categories, with the exception of Et cetera, which, well, I don’t know what else to call it. I’m not abandoning the usual format – just experimenting. Let me know if you have thoughts, positive or negative, on this approach.

A Light at the End of the Tunnel?: After a press statement that left us (well, me) wanting more specifics, Governor Kate Brown’s administration this week has begun providing a bit more detail. Consistent with the press statement, there are still criteria that must be met before reopening begins. One is “downward trajectory of documented cases within a 14 day period.”  Excuse me if I’m belaboring things, but my question continues to be, does this mean a decline in the total number of current, documented COVID-19 cases, or a reduction in the growth of cases? If the latter, barring a tragic reversal, we have already checked this one off: 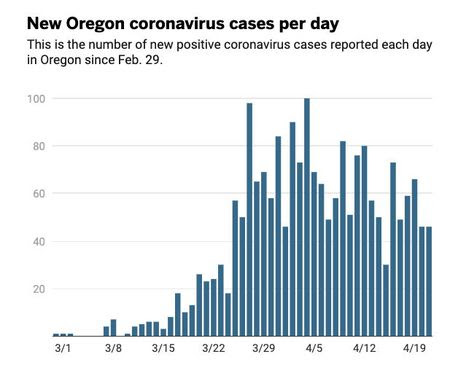 That’s a downward trajectory in the number of new cases reported from at least April 3 to April 21. If the metric is the total number of active cases, then that presumably hasn’t been reached yet. I’ve gone through this a bunch of times, and I still honestly don’t know which metric the Governor means.

Another prerequisite requires the availability of “robust” (sigh) testing for hospital workers but only “sufficient” personal protective equipment for them. Those imprecise adjectives for now hold the place that numbers, or at least ranges of numbers, should occupy. Similarly, we don’t know what the process and priorities of opening will be, e.g. piercing studios versus tattoo parlors versus goat yoga studios, once the prerequisites are established and met.

Back on March 27, four days after Governor Brown issued the stay home order, I urged her and other leaders to share the data and criteria they’re using to make decisions, including decisions about when and how to reopen. Unfortunately, I received, to my knowledge, zero votes for governor in 2018, but more importantly we’re still struggling to get specifics about a plan to reopen. This planning process, which at least is now getting communications attention from the Governor’s office, should have been started as soon as the shutdown started because, well, once you shut it down you gotta open it back up again. The delay and lack of detail is, I think, contributing to the protests we’ve begun seeing. The Governor’s office says the plan won’t be ready until the week of May 4. I hope they beat that deadline.

Good News: Governor Brown yesterday announced that hospitals and dental offices can reopen for elective procedures as of May 1, so long as they vouch for having adequate personal protective equipment and, in the case for hospitals, adequate capacity to handle a surge in COVID-19 cases. This is important because hospitals (and I assume dental practices) have been hemorrhaging money while, in the case of St. Charles, having, as I write this, zero (0) COVID-19 patients, and people have been going without important care.

The Governor’s approach here is, I think, spot-on: hospitals know how to run themselves better than the state, so it’s appropriate for the state to provide some guidelines and allow hospitals to essentially self-certify that they’re ready to reopen. It’s a decentralized approach that acknowledges the likelihood in differences between facilities. It also, for the first time in the debate about reopening, has a date certain.

Buy Local: During the last economic collapse (I know I’m getting old because I’ve been an arguably sentient adult for multiple of these now), there were lots of bumper stickers around Bend urging us to “buy local.” It’s remarkable how many of those you’d see in the Target parking lot. It’s almost as if people derive satisfaction from telling people to do things they themselves don’t do. The “buy local” stickers were but a faint warning for today’s quarantine social media shaming. Let’s just say the more emphatically and repeatedly a person posts “stay home save lives” the more I assume he or she is privately holding neighborhood-wide spin the bottle parties.

But I digress. One of the best features of Governor Brown’s developing framework to reopen is that it stresses regional or county flexibility. This makes a ton of sense in a state with five counties with zero COVID-19 cases. It also makes a ton of sense because state law requires counties to have public health authorities, and the state provides funds for the same. Did you know Deschutes County has its own epidemiologist as well as a communicable disease investigator? Me neither, until recently. The purpose of requiring and funding these local experts is, presumably, to empower counties to confront public health emergencies in their counties. There is local expertise that can contribute to a localized approach, and the Governor should rely upon that local expertise, within state guidelines, as she is doing with hospitals.

The Deschutes County Commission is meeting this (Friday) afternoon to discuss how to reopen the county. Life and business are restricted not largely by county action, but by the Governor’s stay home order. So, the county should focus on the prerequisites the Governor appears likely to require. That would include working with St. Charles to ensure adequate PPE and also communicating with the state and the public about the COVID-19 positive tracing program already implemented by the county. The goal should be to assure the Governor and Deschutes County residents that the county is the right entity to manage reopening pursuant to a statewide plan that hopefully grants significant flexibility to counties.

Business Finder: There are lots of signs around town reminding people that certain businesses are open to varying degrees during the lockdown. There’s generally a lot of confusion about the extent of the order, and I’ve found that lots of places are open (legally) that one wouldn’t necessarily expect. So, if you’re reading this email (or as a blog post) and own or work at a business in Bend or elsewhere that is open and could use some exposure, just email me your business name, business type, and url, phone number, or email for people to reach you. I’ll run any submissions at the end of next week’s BBR. A surprising number of people, located both in Bend and all over the place, read this thing, and every little bit of exposure helps these days!

Your friends can sign up to receive the Bend Business Roundup here. No sales, no spam. Just the weekly email you’ve come to know and love.

Have a great weekend!

Jeff started EagerLaw PC to help Oregon entrepreneurs succeed in business. Jeff worked in Washington, D.C. for Oregon Congressman Greg Walden, served as Mayor of the City of Bend, and has been practicing law in Oregon for over a decade. Jeff believes strongly in entrepreneurship and enjoys making the legal side of business transparent and easy for his clients.

Leave a reply Click here to cancel the reply